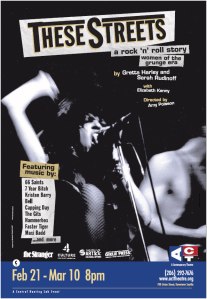 “These Streets” is an unconventional theatrical play and history project, inspired by women rock musicians in Seattle during the famed grunge years. Spearheaded by rock guitarist, Gretta Harley (faculty member at Cornish College of the Arts, and guitarist who played in several bands during the era), Sarah Rudinoff (Actress, Writer and The Stranger Genius Award Winner) and Elizabeth Kenny (Actress and award winning playwright), “These Streets” is inspired by over 40 interviews conducted with and about the many women rockers who were integral to the Seattle music scene during this legendary era. In addition to the theater piece, oral histories are being filmed and will be included in the library at the University of Washington.

Thesestreets.org is a digital archive that includes bios, photos, discographies and music from the women that inspired the project. Use the navigation on the right (below if mobile) to learn more about these amazing women.

Find out more about These Streets: