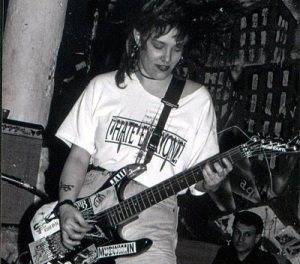 Stefanie Ann Sargent was a familiar figure in the Seattle music scene in the late 1980s and early 1990s, and became well recognized as the original guitarist for 7 Year Bitch. She first played with Selene Vigil-Wilk (vocals), Valerie Agnew (drums) and Lisa Orth (guitar) in the band Barbie’s Dream Car. When their bassist left for Europe they recruited Elizabeth Davis, and changed the name of the band to 7 Year Bitch. Lisa Orth was no longer in the band at this point, and Stefanie became the sole guitarist for 7 Year Bitch. Their first concert was a benefit at the OK hotel with the Gits, DC Beggars and several other bands.

Stefanie released a 7″ & EP with the band,  recorded for compilations, performed a number of shows (including at New Music Seminar & CMJ), and was in the process of recording their debut album for C/Z Records, but just prior to its release Stefanie suddenly died from a drug/alcohol related cause. This was just days after her 24th birthday, on June 27, 1992. Stefanie’s death had a profound effect on the band and the Seattle music community as a whole. 7 Year Bitch decided to release all the material they had recorded and dedicated the album to her; they titled it “Sick ‘ Em.” After a prolonged period of uncertainty, the band decided to continue, recruiting guitarist Roisin Dunne to play guitar.