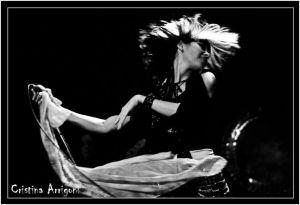 Jen Ayers has been singing, playing piano and writing music since age 5. Her most beloved possession as a kid was a red transistor AM radio she carried with her wherever she went. She grew up on classic tunes and melodies – knowing every word to every song and singing them loudly and passionately. Playing dress-up in public was also a favorite pastime – like the time she impersonated Shirley Temple and won a prize for singing “Animal Crackers In My Soup” at a local talent show.

The classically trained pianist, choir performer and lover of rock music moved from the Midwest to Seattle in 1992 with her partner Graham to start a band. Together they formed three different projects – Pompous Fedora, Fedora and Honey Tongue – writing, recording and performing thousands of shows nationwide.

She studied with nationally renowned vocal coaches Maestro David Kyle and Susan Carr to learn how to perfect a high rock scream without doing damage or losing her voice. These skills came in handy when Jen took on the challenge of channeling Steven Tyler in “Dream On,” an all-girl Aerosmith cover band, while Honey Tongue was on hiatus.

Over the years, Jen’s powerhouse vocals and gritty performances earned invitations to sing the National Anthem at NBA/MLB games coast to coast, the opportunity to belt out Led Zeppelin tunes for “House of Thee Unholy” – an annual Broadway-level burlesque show at Seattle’s Triple Door, and a starring role in an independent film Honey Tongue also wrote two songs for, and performed on screen.

In 2012 Jen released her first solo CD, “Every Day Is A Parade” – inspired by the magical island of Bali and explores the journey from rock music to motherhood.

Recently, Jen was cast in the role of Linda Emery (Bruce Lee’s girlfriend) in Teatro ZinZanni’s production of “Return To Paradise.” This experience was a career highlight as it enabled her to do dabble in all the things she loves most at the same time: singing, acting, dancing, and even spinning from a cirque cage while performing Honey Tongue’s original song “I Wanna Go,” all while wearing colorful, custom-made costumes.